OBD stands for “On-Board Diagnostics.” It is a computer-based system originally designed to reduce emissions by monitoring the performance of major engine components.

A basic OBD system consists of an ECU (Electronic Control Unit), which uses input from various sensors (e.g., oxygen sensors) to control the actuators (e.g., fuel injectors)  to get the desired performance.  The “Check Engine” light, also known as the MIL (Malfunction Indicator Light), provides an early warning of malfunctions to the vehicle owner. A modern vehicle can support hundreds of parameters, which can be accessed via the DLC (Diagnostic Link Connector) using a device called a scan tool. 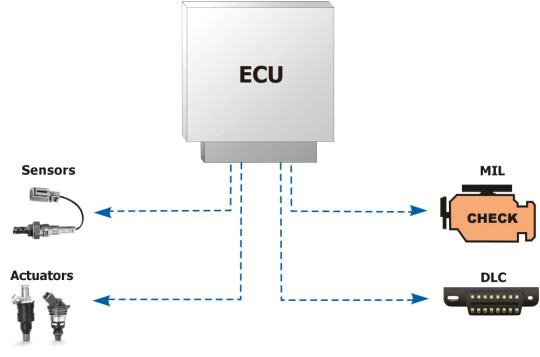 There are two kinds of on-board diagnostic systems: OBD-I and OBD-II.

OBD-I refers to the first generation OBD systems which were developed throughout the 1980s. These early systems use proprietary connectors, hardware interfaces, and protocols. A mechanic who wanted to access diagnostic information typically had to buy a tool for every different vehicle make. OBD-I scan tools that support multiple protocols are supplied with an array of different adapter cables.

In the early 1990s, Society of Automotive Engineers (SAE) and International Standardization Organization (ISO) issued a set of standards which described the interchange of digital information between ECUs and a diagnostic scan tool. All OBD-II compliant vehicles were required to use a standard diagnostic connector (SAE J1962), and communicate via one of the standard OBD-II communication protocols.

OBD-II was first introduced in model year (MY) 1994 vehicles, and became a requirement for all cars and light trucks starting with MY1996.